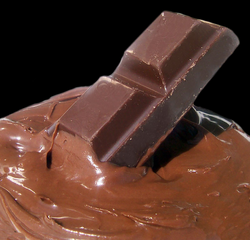 Farmers of cocoa are some of the poorest farmers in the world. They make barely enough to survive.

Fair Trade chocolate initiatives are based on providing a decent return to cocoa farmers so that they and their families can survive on growing cocoa.

Roughly two-thirds of the world's cocoa is produced in Western Africa. Close to half of the total of cocoa is sourced from Côte d'Ivoire. Like many food industry producers, individual cocoa farmers are at the mercy of volatile world markets. The price can vary from between £500 ($945) and £3,000 ($5,672) per ton in the space of just a few years. While investors trading in cocoa can dump shares at will, individual cocoa farmers are not able to ramp up production and abandon trees at anywhere near that pace.

Only two to three per cent of "cocoa futures" contracts traded in the cocoa markets ever result in the physical delivery of cocoa. Every year, seven to eight times more cocoa is bought and sold on the exchange than exists.

Challenges in the Cocoa Industry Edit

It has been alleged that an estimated 90% of cocoa farms in Côte d'Ivoire have used some form of slave labour in order to remain viable. When cocoa prices drop, farmers in West Africa sometimes cut costs by resorting to slave labour.

Child trafficking is also a big problem in the cocoa industry. According to the Stop the Traffik campaign, 12,000 trafficked children work on Ivory Coast plantations.

Retrieved from "https://ethicalliving.fandom.com/wiki/Fair_Trade_Chocolate?oldid=3339"
Community content is available under CC-BY-SA unless otherwise noted.